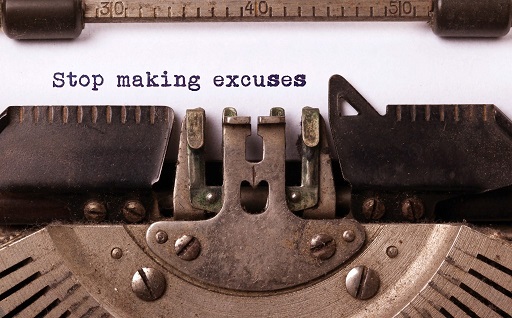 In the first post of this series on people-pleasing, we looked at the downside of needing approval. We also explored the decision-making process. Now let’s look at another sign: making excuses.

Often it’s a good idea to tell someone why you can’t do as they ask. If the person making the request has authority over you, an explanation (and perhaps an apology) may be necessary. If your boss wants you to represent her at next week’s conference, “No thanks, I’d rather not,” won’t do the job. And if your good friend asks for a favor, it’s usually best to tell him why you can’t help this time. A simple explanation communicates that you care and leaves the door open for next time.

So what’s the difference between explaining yourself and making excuses? The Oxford Dictionary of Current English defines an excuse as “a reason put forward to justify an offence.” The second definition is simply “apology.” Explaining yourself is neutral; making excuses implies a mistake of some kind. When we say, “Why did you do that?” we’re asking for an explanation. “What’s your excuse?” tells others that they’ve screwed up. We are not impressed.

So what’s wrong with that? Less conflict is good, isn’t it?

Here’s the problem: excuses tend to fuel the conflict. They give the other more ammunition, more points to argue. Excuses create the opportunity for debate – a debate that can continue for as long as we allow it. And there’s something else to consider. Making excuses tells your subconscious (1) that you’re wrong in some way (Why else would you be apologizing?) and (2) that the other’s opinion is very important – possibly more important than your own. So making excuses keeps your self-esteem low.

It also gives others a great deal of power. Usually we want them to accept our excuses as valid. If they don’t, we keep trying to convince them. This gives them the opportunity to talk us out of what’s best for us – or simply wear us down with endless debate.

Sometimes others don’t want what you want. If you find yourself habitually justifying your decisions, it’s time take good, hard look at whom you’re trying to please – and why.