Boundaries: Why You Can’t Say “Yes” without Saying “No” 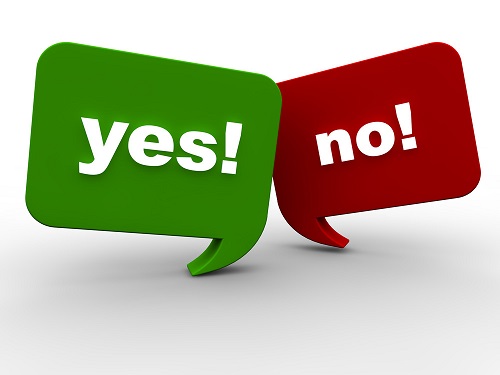 Sometimes boundaries are more subtle than we realize.

Every time you say yes to one thing, you say no to another. You just haven’t said it out loud.

I once had a client for whom no was truly a bad word. Based on childhood experiences, she associated it with judgment and rejection. She found rejection painful, and she didn’t want to hurt anyone she cared for that way. Because she equated no with intense emotional pain, she was unwilling to say it.

If you struggle with this simple little word, you’re not alone.

Here are a few things to keep in mind when your fears surface:

When trying to avoid saying no, be clear about what you’re protecting. What are you saying yes to? You could to explore what else you might say yes to. If you’re not willing to look after your brother’s kids for the weekend, would you still be willing to help out? Maybe a few family members can pitch in. Would you be willing to look after them Saturday morning and take them to their grandparents after lunch? There may be many things you can say yes to and still protect the time you need for other priorities. Surrounding your no with meaningful yeses can be a great way to let your brother know that he’s still important to you. You’re not saying no to him (or what matters to him); you’re just limiting the size of your commitment. That way you can say yes to him without having to say no to yourself.

To truly say yes to one thing, you must be prepared to say no to another (or even many others). Once you accept that, it gets a little easier.

Boundaries or Demands: Which Is It?

When we think of setting boundaries, we often think of conflict. That’s why we avoid certain issues; we know they will lead to trouble. Yet all too often we don’t understand why.

Sometimes the “boundaries” we’d like to set are nothing more than attempts to control others. This is where the trouble begins. Consider the following statements:

To the uninitiated, these may sound like reasonable boundaries. But in reality, they are merely demands.

If this comes as a surprise to you, you’re not alone. Very few of us have taken the time to consider what a boundary really is. Contrary to popular belief, a boundary is not a statement of what others must (or must not) do. Your boundaries are about you, your values and the choices you make in order to protect those values. Phrases like “he needs to …,” “it’s time she started …” and “they must stop …” aren’t about you at all; “He,” “she” and “they” are the ones who must do something, not you. This is the definition of a demand.

What’s missing from these statements is the role of the speaker. Although the values are fairly clear, the choices are not. What will I do if I don’t get what we want? Exactly what is my boundary and how will I protect it?

What are boundary statements?

Boundary statements begin with phrases like, “I will” or, “I won’t.” To transform the previous demands into boundaries, we must add ourselves:

Rather than making demands, these statements clarify the limits of what we will and will not do. The last response ends with a question; that’s because there’s more than one person involved in the decision. “I intend to say no” makes the desired outcome clear, while the question acknowledges the importance of the other person’s input.

Demands are usually loaded with judgement, and making them naturally leads to conflict. When we take responsibility for ourselves and transform those demands into boundaries, the conflict diminishes. Any conflict that remains is tied to actions rather than judgements. Actions are much easier to handle.

Wayne Dyer put it so well:

Love is the ability and willingness to allow those that you care for to be what they choose for themselves without any insistence that they satisfy you.

Don’t you wish the whole world operated that way?